Hydroponics means working water and comes from the Greek words ‘hydro’ and ‘ponos’, meaning water and labor. Many different civilizations have utilized hydroponic growing techniques throughout history so they are not a new method of growing plants. Giant strides have been made over the years in this innovative area of agriculture.

Throughout the last century, scientists and horticulturists have experimented with different methods of hydroponics. One of the potential applications of hydroponics that helped continue research was for growing produce in non-arable areas of the world. Hydroponics was also integrated into the space program as hydroponics easily fit into their sustainability plans. This research is ongoing.

By the 1970s, scientists and analysts were not the only people interest in hydroponics. Traditional farmers and eager hobbyists began to be attracted to the virtues of hydroponic growing. Some of the positive aspects of hydroponics include the ability to produce higher yields than soil-based agriculture and allowing food to be grown and consumed in areas of the world that cannot support crops in the soil.

Hydroponics also eliminates the need for massive pesticide use, which makes the air, water, soil, and food much cleaner. Commercial growers are changing to hydroponics like never before as the ideals surrounding the growing techniques touch on subjects that interest most people, including world hunger and making the world cleaner.

Everyday people have begun to purchase their own hydroponic systems to grow great tasting and fresh food for their family and friends. Educators have also begun to realize the amazing applications that hydroponics can have in the classroom. Many gardeners have made their dreams come true by making their living in their backyard greenhouse and selling their produce to local restaurants and markets.

The potential of hydroponic culture is incredible, but commercial hydroponics in the United States was held back until hydroponic systems that were economical to build and relatively easy to operate became available in the marketplace. With the advent of high tech plastics and simpler system design, this came about in the late 1970s. The energy saving poly greenhouse covers, the PVC pipe used in the feed systems, and the nutrient injector pumps & reservoir tanks were all made of types of plastic not available prior to the 1970s. 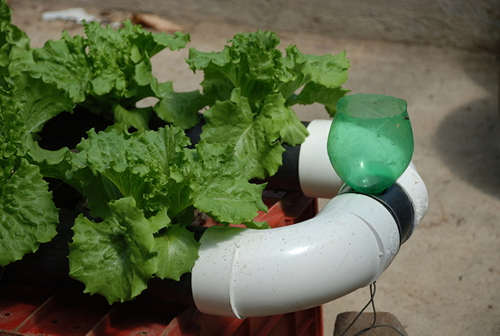 Commercial crop growers are turning to soil less cultivation more and more. The speed of growth combined with the control over the growing environment means higher quality crops. The worry over soil born diseases and pests are greatly reduced, plus weeding is a thing of the past. For commercial growers, rapid harvest and higher yields are great reasons to grow hydroponically. The techniques used by commercial growers are now available to the home gardener.

Hydroponics may be used in underdeveloped countries for food production in limited space. It is even feasible to grow hydroponically in areas of poor soil conditions, such as deserts. The desert sand serves as a good growing media and seawater can be used to mix nutrient solution once the salts have been removed. The popularity of hydroponics has increased dramatically over a very short period of time. Experimentation and research in the area of indoor and outdoor hydroponic growing is an ongoing process.

Hydroponic Systems gardening can be a fun and productive new way of gardening for you. We have tips and resources to get you started fast!